I hope you'll forgive me (can you see me winking?), but I'm going to revisit the Blue Buoy Barnacles (Dosima fascicularis).  A number of questions and discoveries came up after the original post on 31 August, and you never know when you will see them again, so it seems worth highlighting a few more things.

"Who are the hitchhikers?" 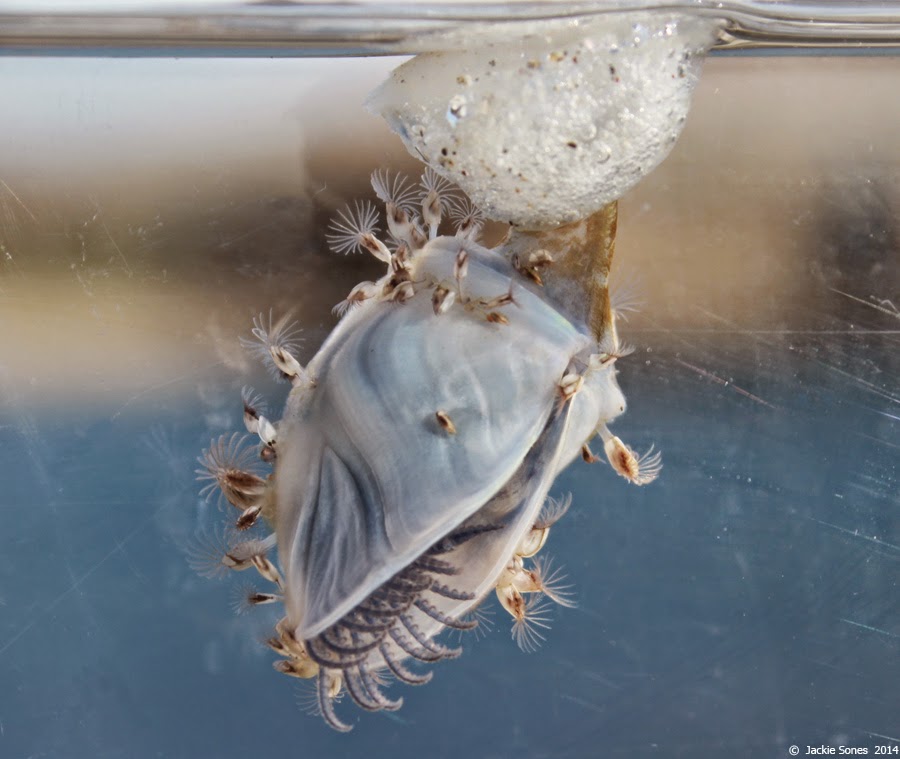 Some people noticed smaller barnacles attached to the Blue Buoy Barnacles.  This is another species of pelagic barnacle called Lepas anatifera.  Look closely (photo above and below), and you'll notice a few differences between the two species: 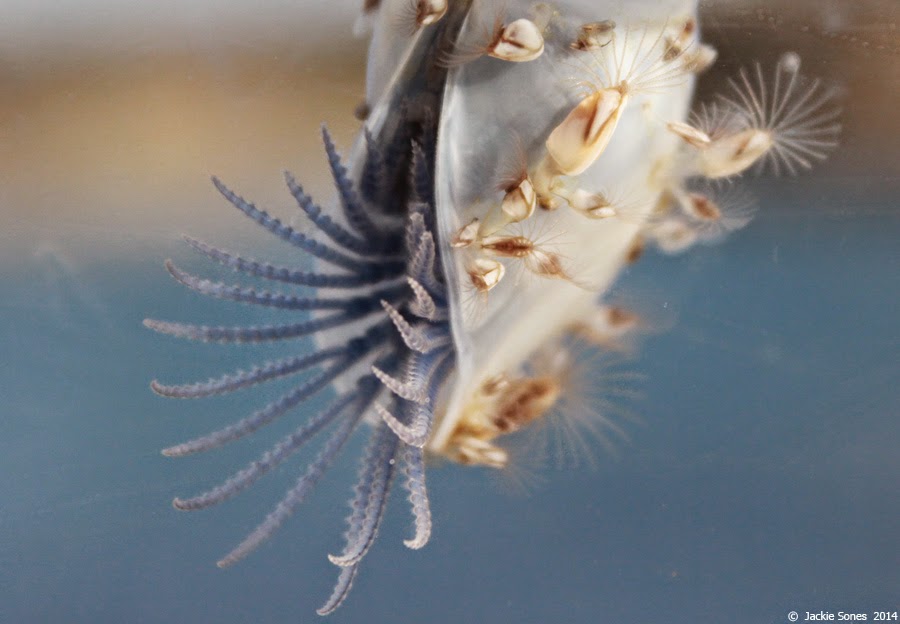 Here's a close-up view of Lepas (growing on Blue Buoy Barnacles) taken under the microscope: 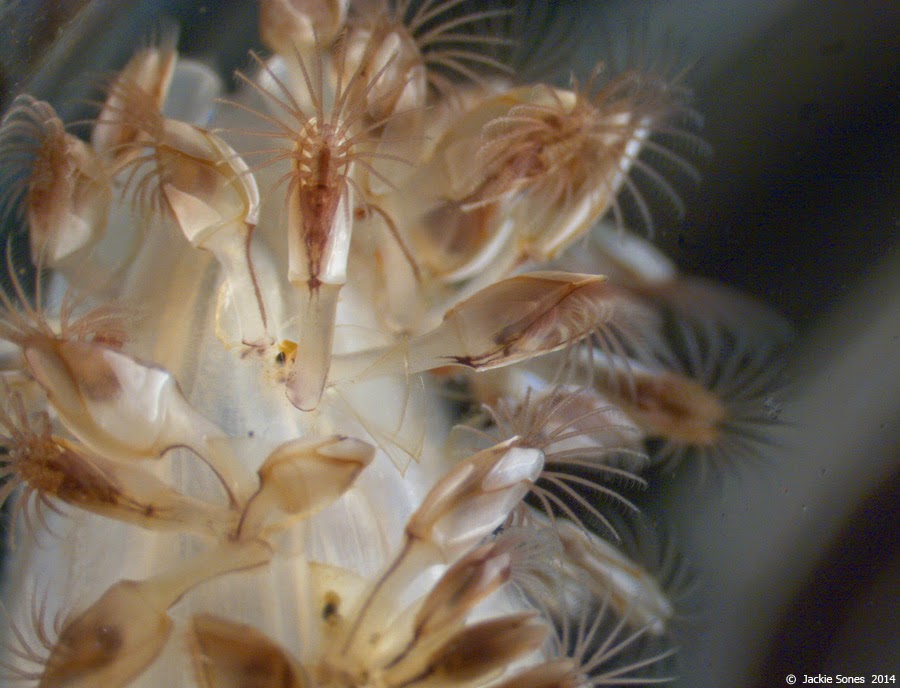 It's hard not to wonder if all of these hitchhiking Lepas will weigh down the buoy as they grow larger?

"Are they calcified or not?" 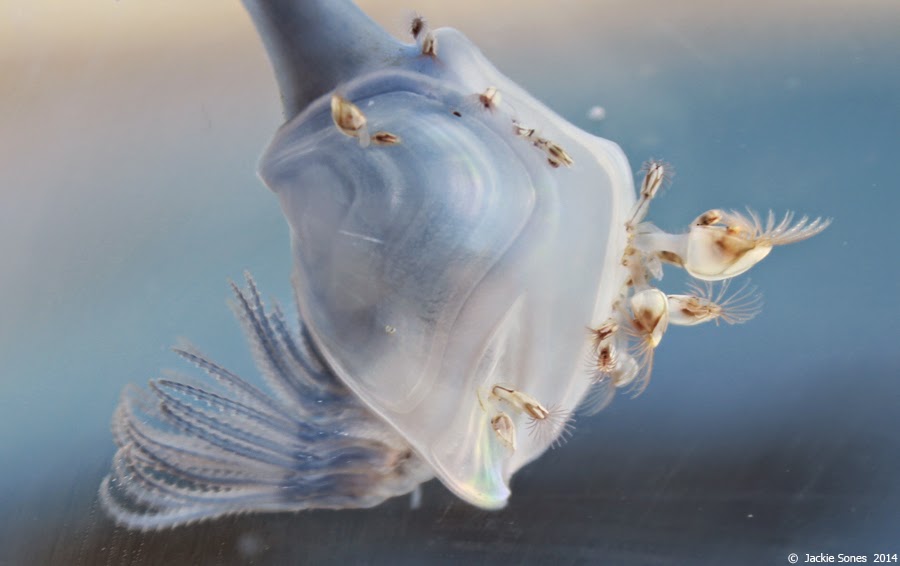 Some people asked about the plates of the Blue Buoy Barnacles and whether they are calcified or not.  Of the five plates present, three of them are visible from one side (see labeled picture below): 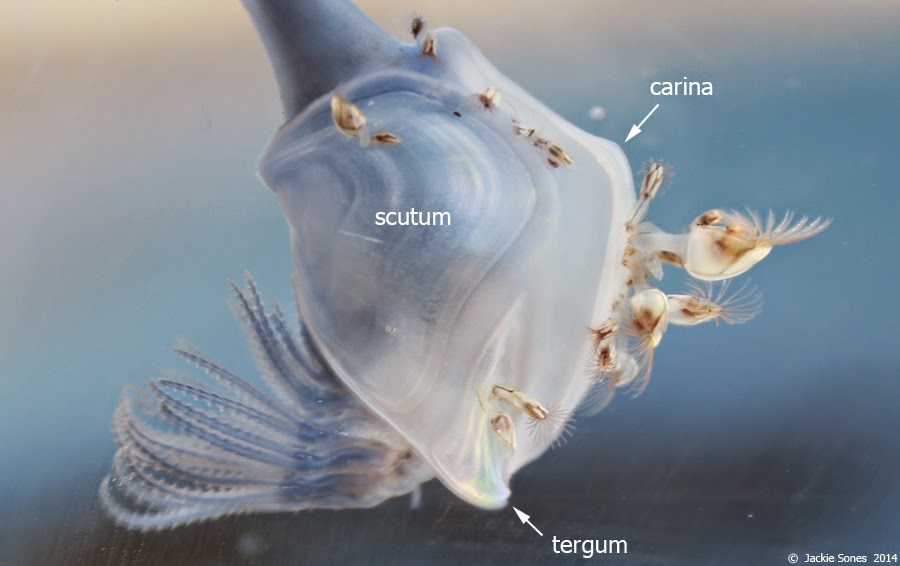 Some of the Blue Buoy Barnacles that we found washed up on the beach weren't alive, so we were able to look at their plates in more detail.  Here's a scan of one scutum and one carina. 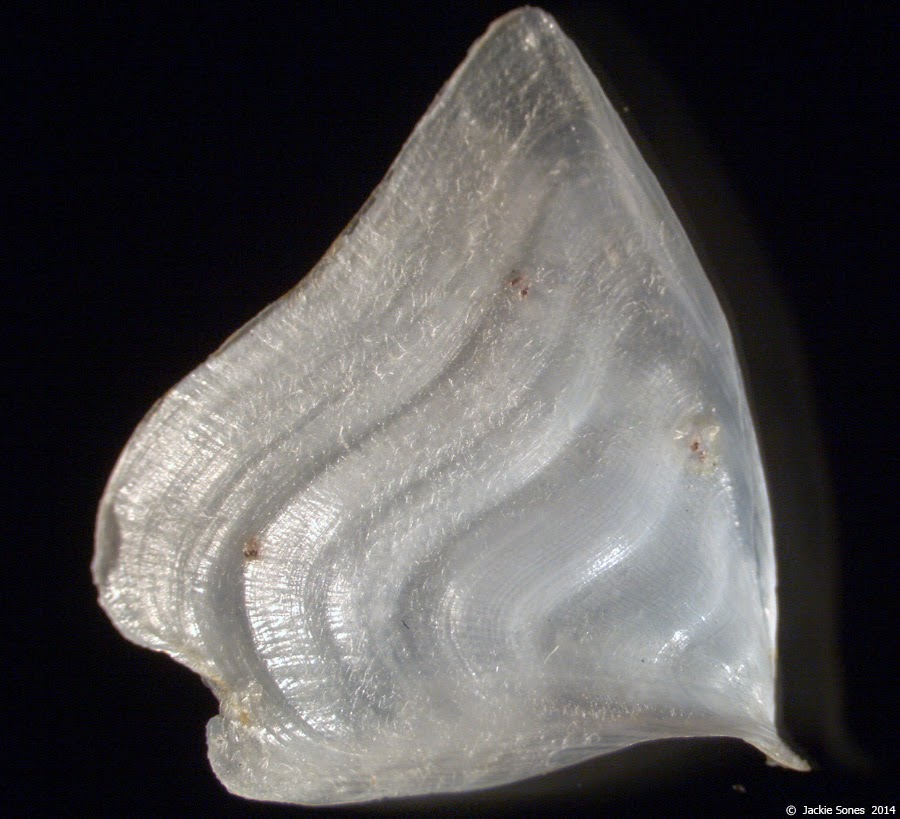 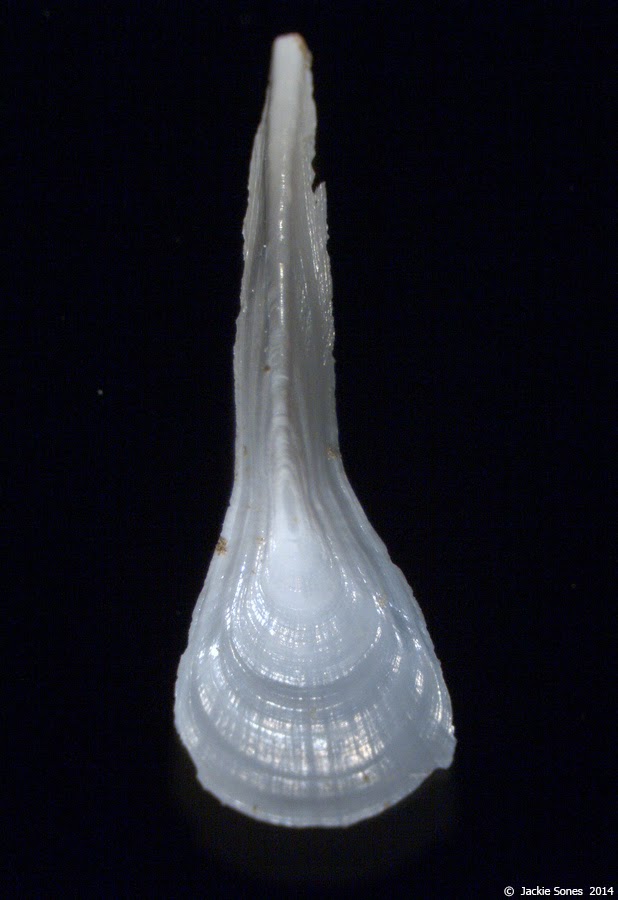 These plates were incredibly fragile — I had to pick them up with a fine paintbrush.  I would agree with the description in Morris, Abbott, and Haderlie, i.e., that Blue Buoy Barnacles have "thin, papery calcareous plates."  I also found one other source that stated they were "almost uncalcified" (Cheng and Lewin 1976).

I can't help it...this is just too interesting not to share.  While scanning the Lepas for any signs of juvenile Blue Buoy Barnacles, I came upon two tiny juvenile Fiona pinnata feeding on the Lepas!  I wrote about the nudibranch Fiona last night and mentioned that when they feed on Velella they're blue, but when they feed on barnacles, they're brown.  Well, here are two examples of very small brown Fiona on Lepas on Dosima! 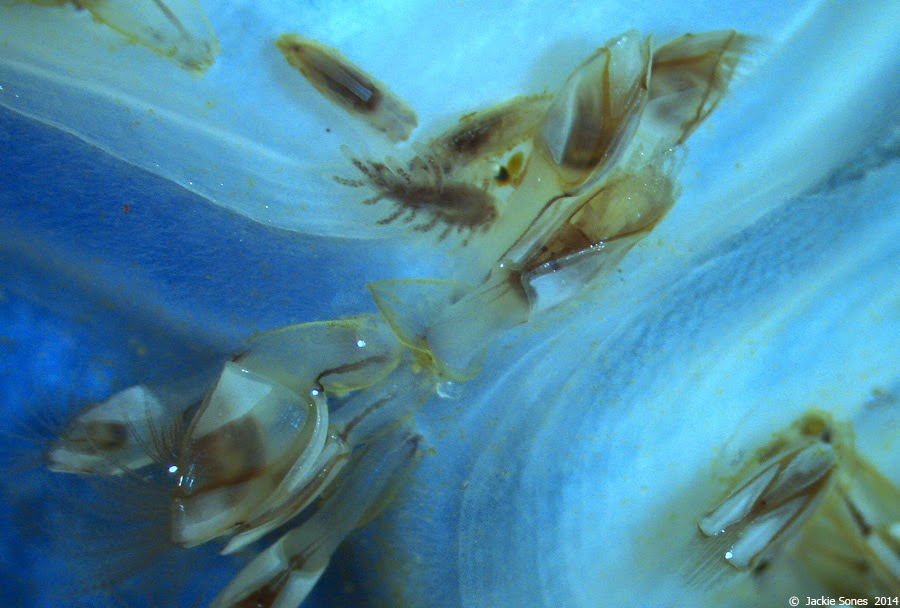 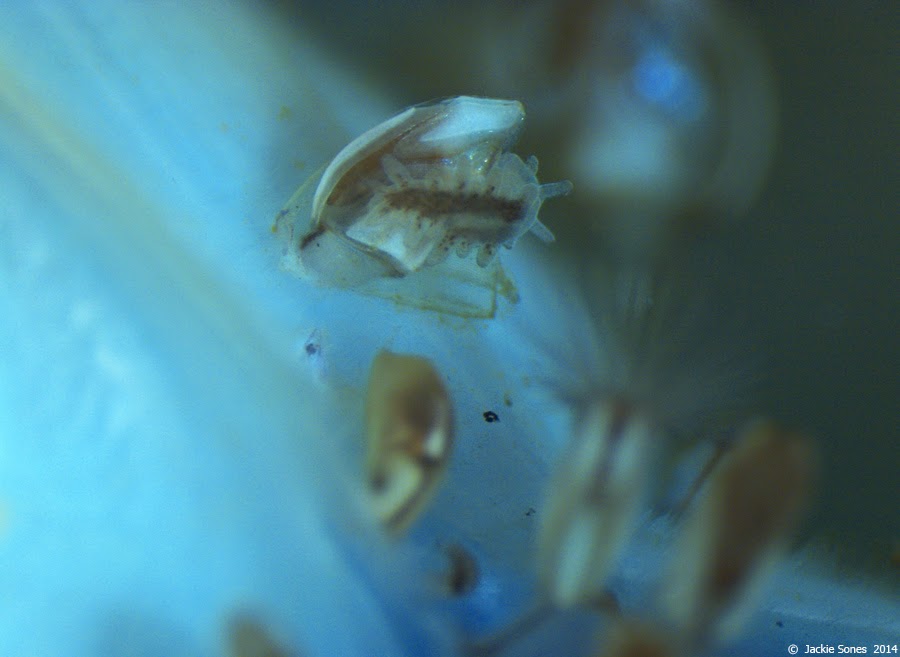 "A question about the float"

During one scan of the Blue Buoy Barnacle floats, I was surprised to see a lot of little eyes looking up at me! 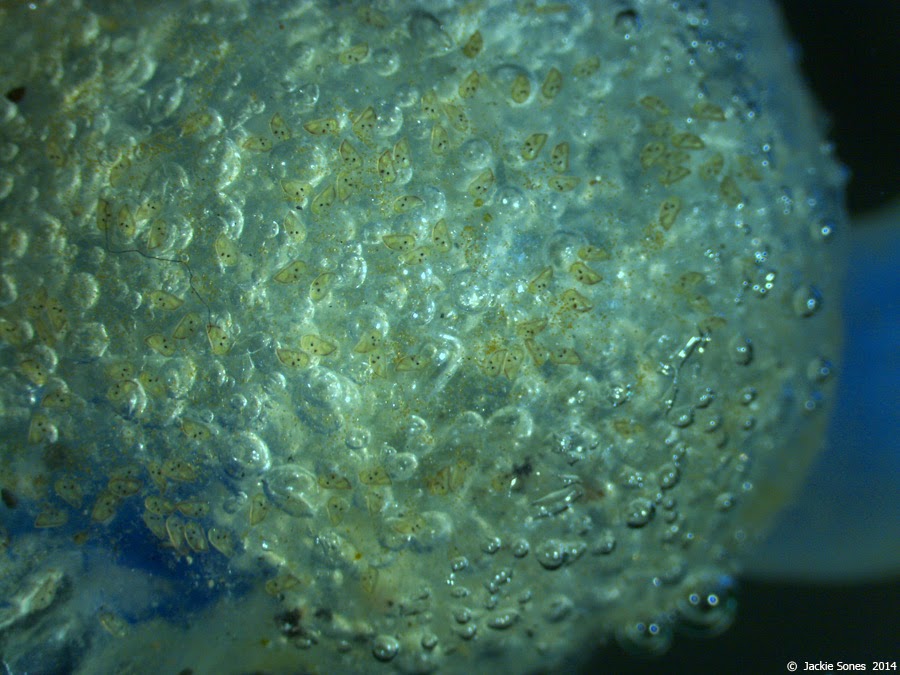 A closer view revealed that they were small barnacle cyprids (the settling stage of barnacle larvae).  At first I thought perhaps they could be Blue Buoy Barnacle cyprids, but then I realized that there were a lot of them, and they were all on their sides, which isn't the normal position.  Puzzling over this, my best guess right now is that these cyprids got stuck in a new layer of float cement that the barnacle had secreted — it's apparently very sticky before it hardens.  Was this an accident?  Or does the sticky cement also act as a defense so that animals don't start to live and grow on the barnacle's float? 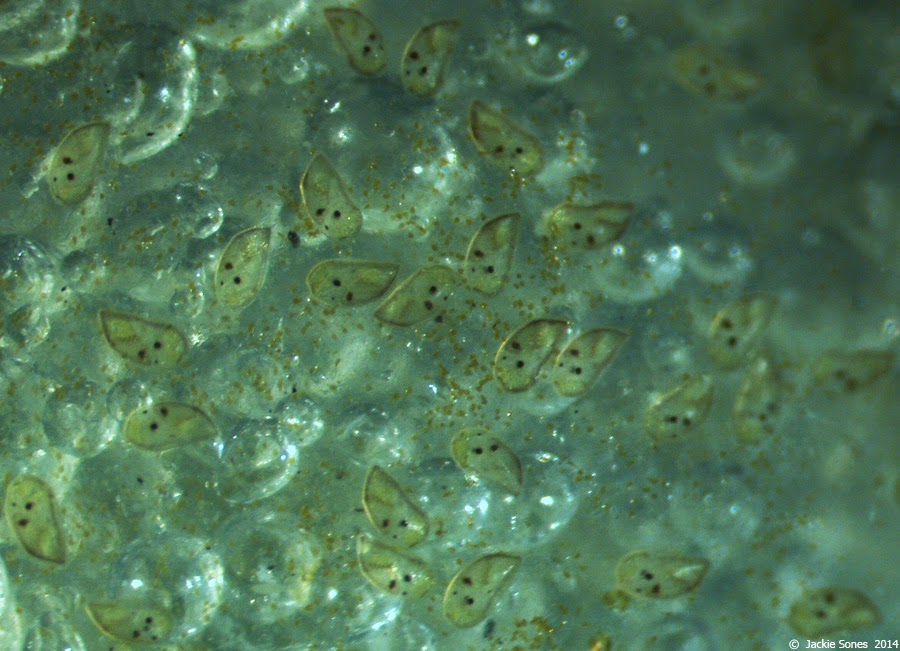 "And finally, a video! 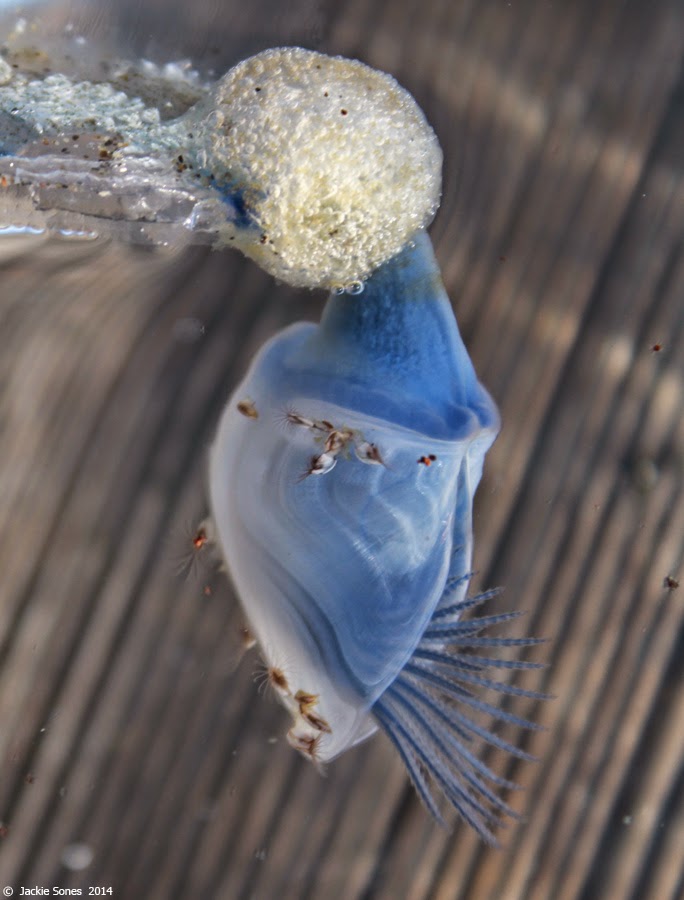 I saved the best for last, so I hope you're still with me.  Although I hadn't revealed it yet, Eric filmed these barnacles to have a record of them for Bodega Head and to document their behavior.  It's an unusual opportunity to see a beautiful pelagic barnacle in action.  He filmed them in a small aquarium and under a microscope and then set it to music — click on the link below and enjoy!

Wonderful post!! Journeyed through it slowly absorbing what was going on and it became more and more intriguing with every frame. And the video is fabulous - Townsend's musical accompaniment is a perfect choice! Thanks so much for this