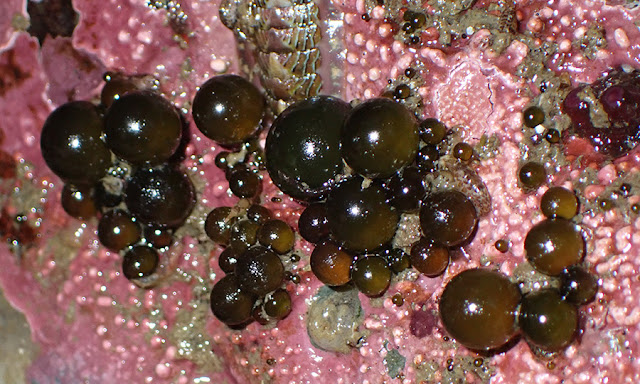 I don't see this algae very often, but encountered a couple of nice patches recently. 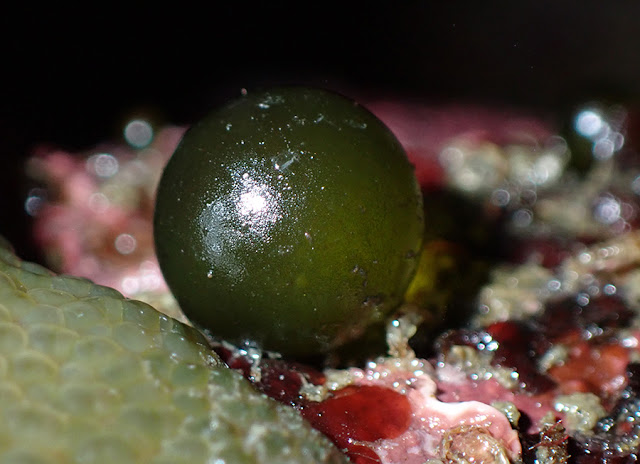 Posted by Jackie Sones at 9:30 PM No comments: 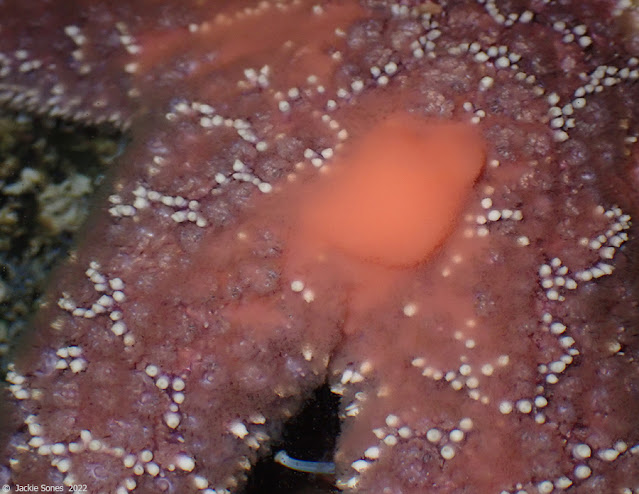 So cool!  This is a female Ochre Sea Star (Pisaster ochraceus) spawning.

We had to work a little late tonight, but it paid off because just before we were getting ready to leave, Eric noticed that a few sea stars were spawning in one of the tanks at the lab!

Here's an even closer view where you can see a large number of eggs being released through pores in the surface of the sea star: 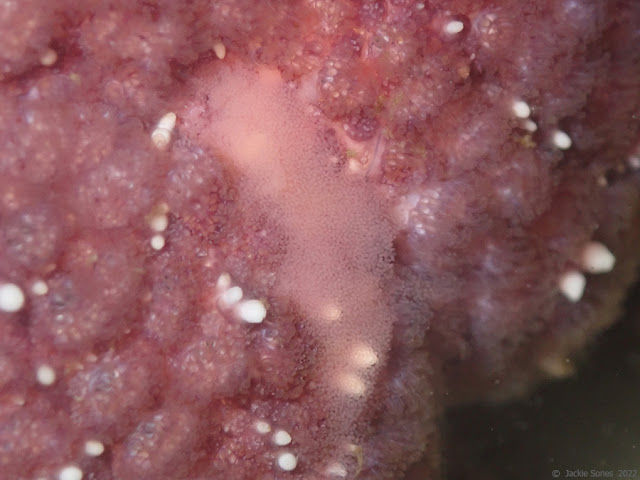 Some of the eggs gathered on a piece of kelp below: 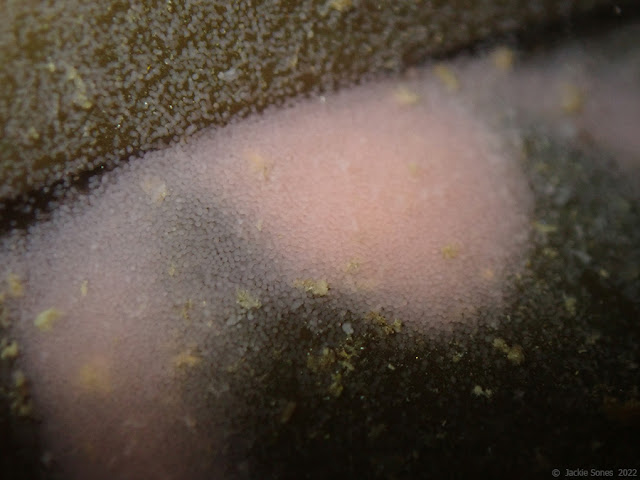 We were curious about whether other animals might also be triggered to spawn, so we checked another nearby tank and...voilà! 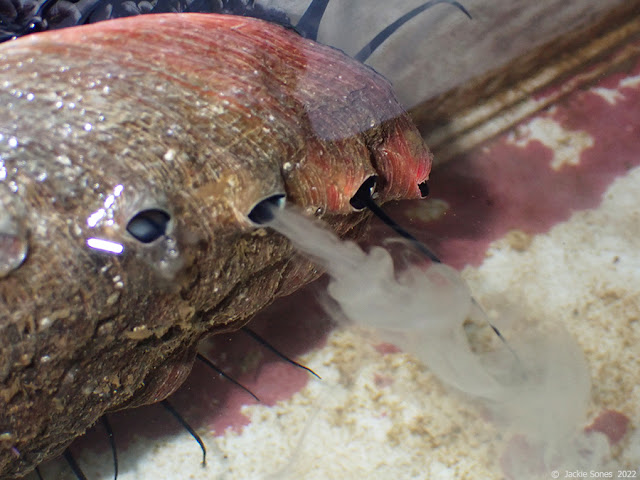 This is a male Red Abalone (Haliotis rufescens) releasing sperm.  The raised pores in the shell act like little volcanoes when the abalone is spawning: 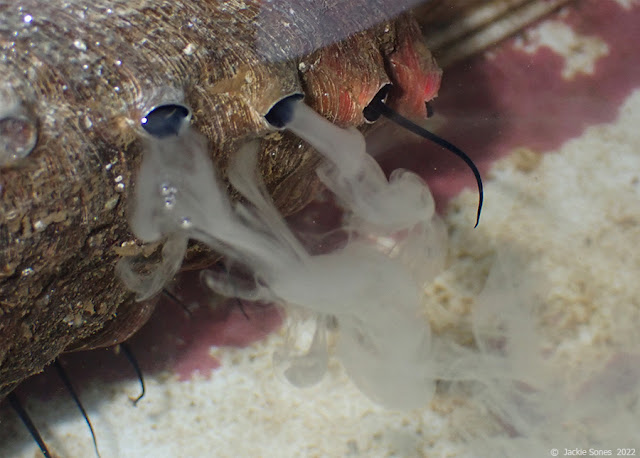 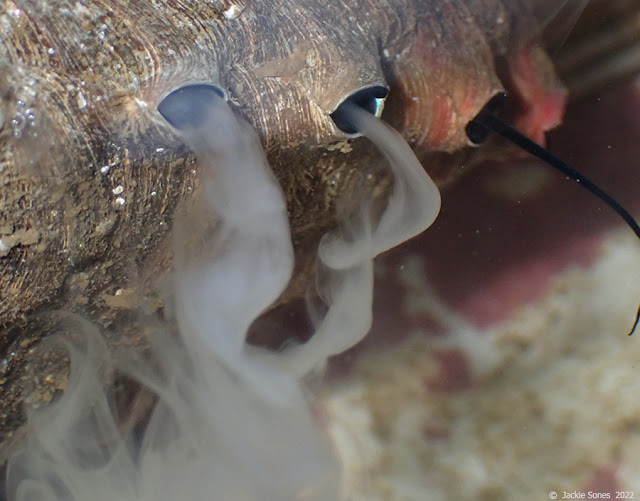 We don't get to see sea stars and abalone spawning that often, so it was a fun way to end the day!
Posted by Jackie Sones at 9:00 PM 4 comments:

Rocks in the pools? 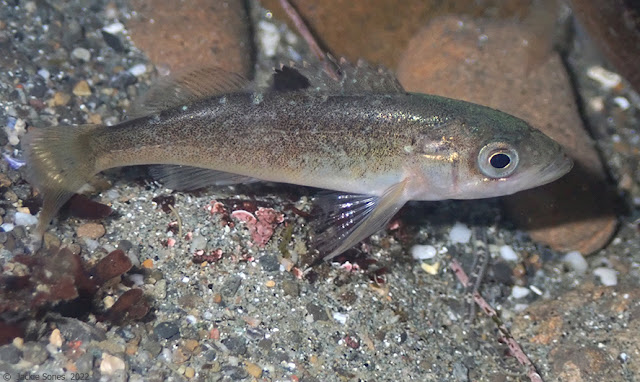 Last week we encountered a few juvenile rockfish at different sites along the Sonoma Coast.  Here are a couple of examples.  Both fish were ~2 inches (~5 cm) long.  I'm not sure which species of rockfish these are, so any comments/suggestions are welcome. 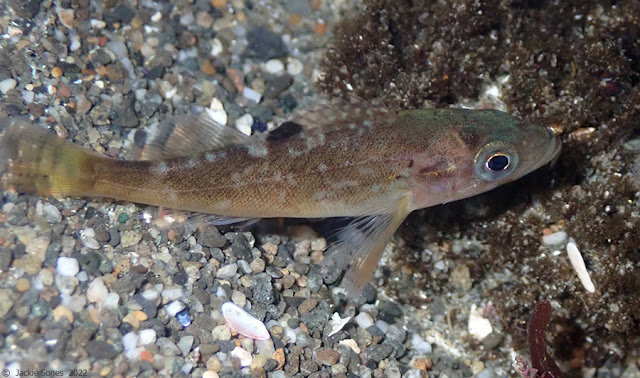 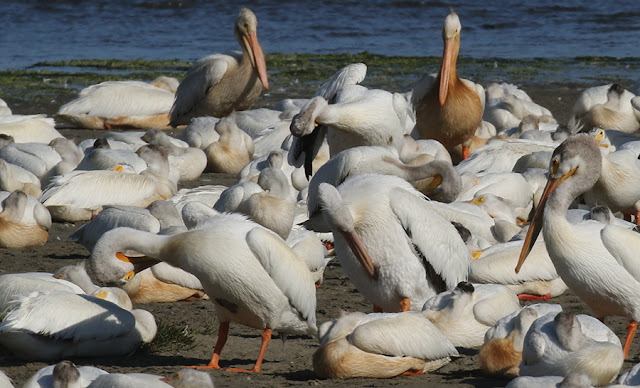 Just a quick photo and a question.  As I was leaving work today, I noticed quite a few of the white pelicans roosting on the tidal flats in Bodega Harbor with rust-colored feathers on their breasts and sometimes their necks.  I hadn't noticed such dark coloration before, so I'm just curious.  Were their feathers stained by iron in the water at the breeding site?  Or is there something local (an abundance of diatoms)?  If you know more about this, I'd be interested in learning!
Posted by Jackie Sones at 9:00 PM No comments: 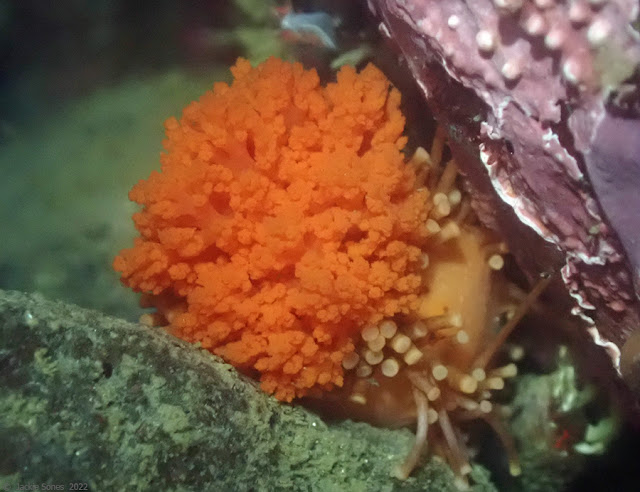 I think we've seen 10 species of sea cucumber in the Sonoma/Marin county area, and over the years I've posted photos of 8 of those, but I haven't shown pictures of a couple of species yet.

So here are two more — above is the Orange Sea Cucumber (Cucumaria miniata).  As you can see, they often live under rocks or in crevices, but sometimes you can catch a glimpse of their bright orange tentacles. 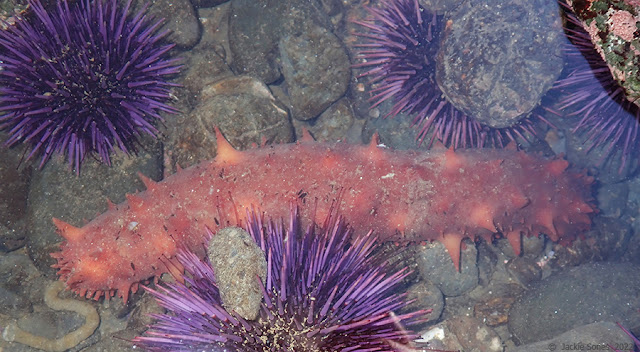 Perhaps you're wondering how many sea cucumber species total occur in this area?  I'm guessing the number is around 16-18 species.  So we have a little ways to go to see all of the different sea cucumbers, but we'll keep looking!
Posted by Jackie Sones at 9:00 PM 2 comments: 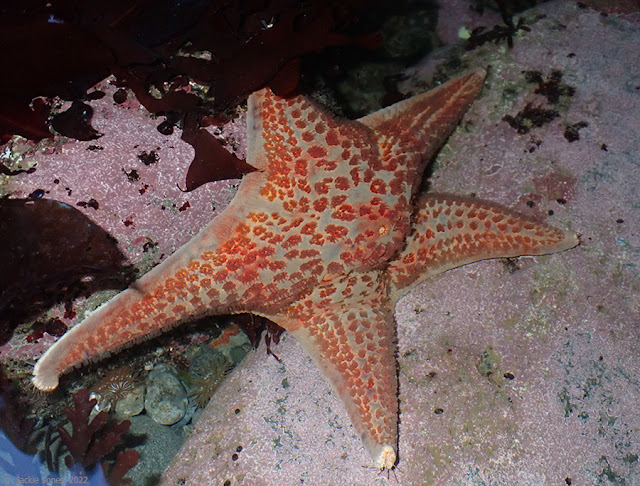 Leather Stars (Dermasterias imbricata) haven't been common in our area during the last few years, so it was nice to catch up with a few this past week.
Posted by Jackie Sones at 8:30 PM No comments: 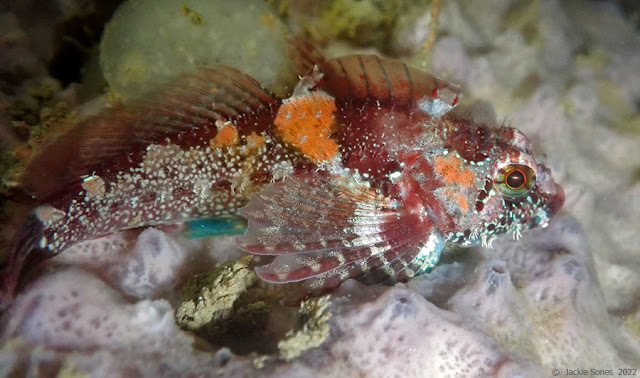 An amazing sculpin resting on a pale purple sponge.  Photographed in the low intertidal zone on 17 June 2022.