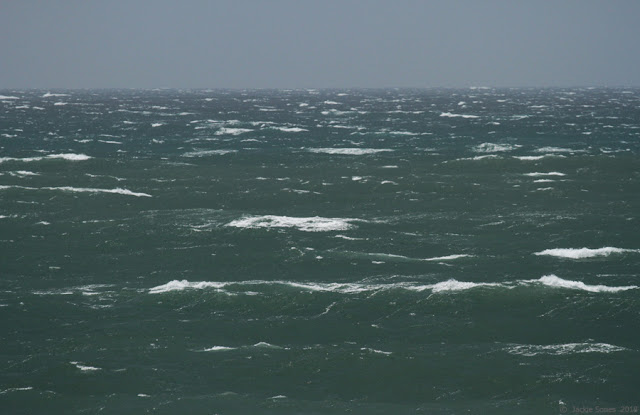 It might not look like it from the photo, but the wind has been howling during the past couple of days.  When this photo was taken, the wind was blowing ~25 knots with gusts to ~30 knots.  Whitecaps to the horizon tell the story.

I walked across the parking lot at work this morning to see a lot of commotion in the distance.  Can you tell what was going on? 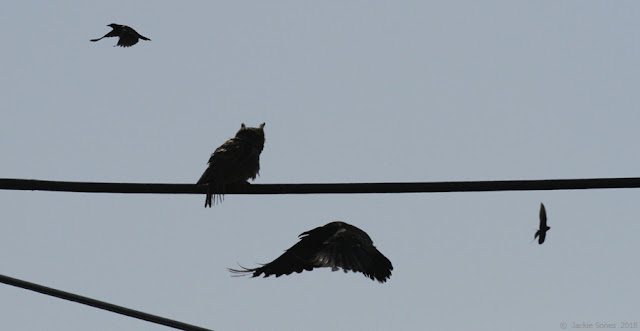 Eventually the owl had enough and it flew off with all of the other birds "in tow" until it found shelter in a tree.

We went for a short beach walk at the end of the day today (28 May 2018).  Eric noticed a spider that looked a little different: 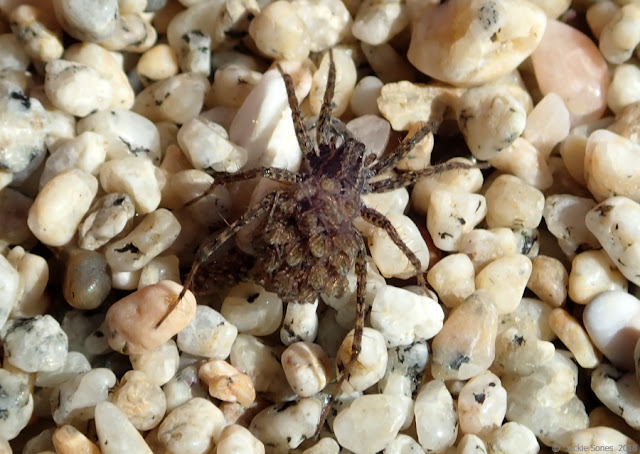 Did you notice how the abdomen looks "fuzzy"?  This spider is carrying its young, so those are tiny little spiderlings clinging to their mother.

Some of the young spiders let go and started running (and I mean running!) among the sand grains.

One stopped briefly in an empty mussel shell: 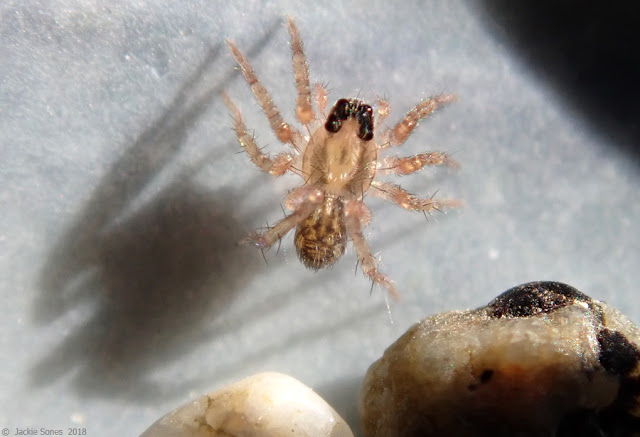 Here's an even closer view of this spiderling that's smaller than a sand grain (an admittedly large sand grain): 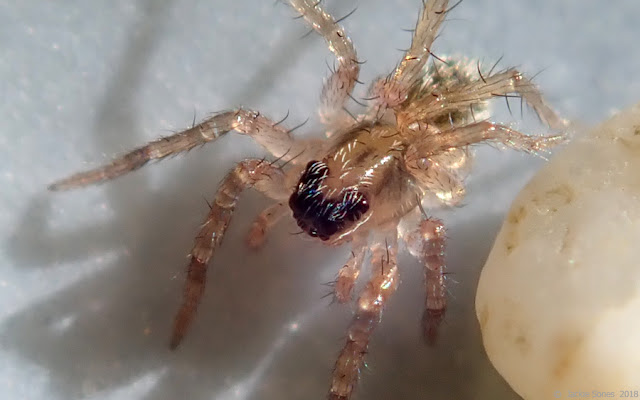 I'm not sure about the identity of this spider, but I'm guessing it's a species of wolf spider (Family Lycosidae).  If you're familiar with it, I'd love to learn which species it is.
Posted by Jackie Sones at 9:00 PM 1 comment: 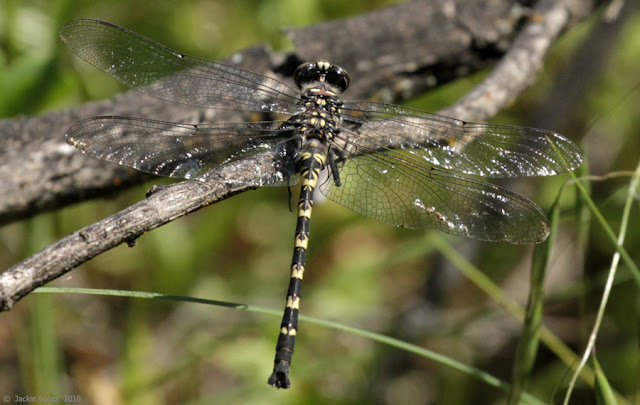 After some chores this morning, Eric and I decided to go on a short adventure to try to see a dragonfly I hadn't seen before — a Black Petaltail (Tanypteryx hageni).  We were lucky and found a few, thanks to a heads-up and helpful hints from Alan.

There are only two species of petaltail (Family Petaluridae) in the U.S., the Black Petaltail (Tanypteryx hageni) in the West and the Gray Petaltail (Tachopteryx thoreyi) in the East.  Black Petaltails range from British Columbia to California, so we're at the southern end of their distribution.  They prefer wet seeps and bogs.

In the photo above, note that the eyes are separated (there's a gap between them) and that the upper abdominal appendages (at the very tip of the abdomen) are broad and rounded (similar in shape to some flower petals).

Here's another view from the side showing the strong yellow markings on both the thorax and the abdomen: 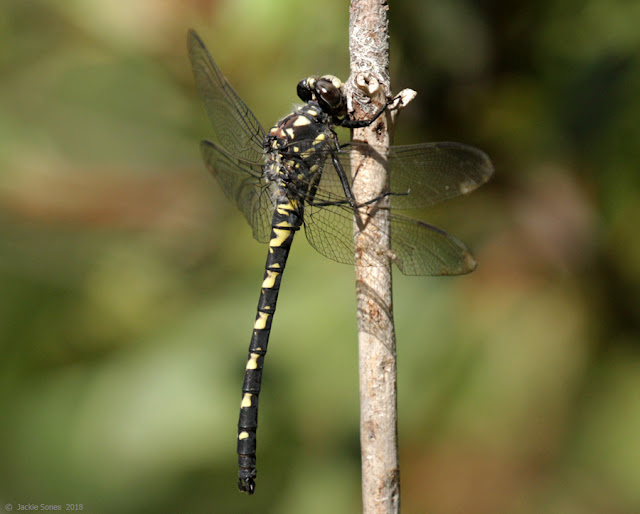 Below is an even closer view of the abdomen so you can appreciate the wonderful patterning: 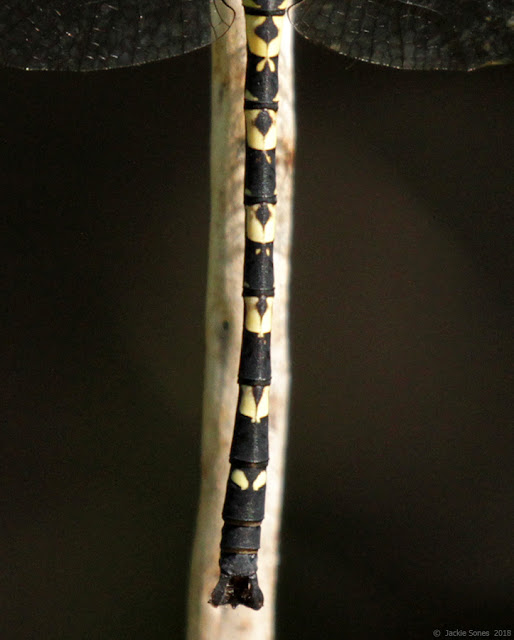 And those beautiful brown eyes: 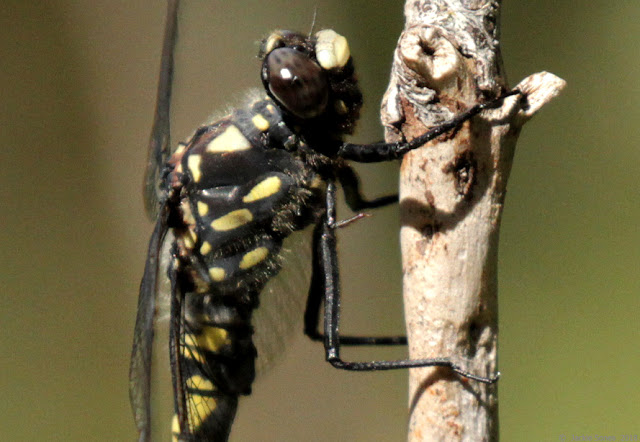 Black Petaltails are rare in Sonoma County, only occurring at a couple of sites.  It was a treat to see them!  Many thanks to Alan for helping us observe them for the first time. 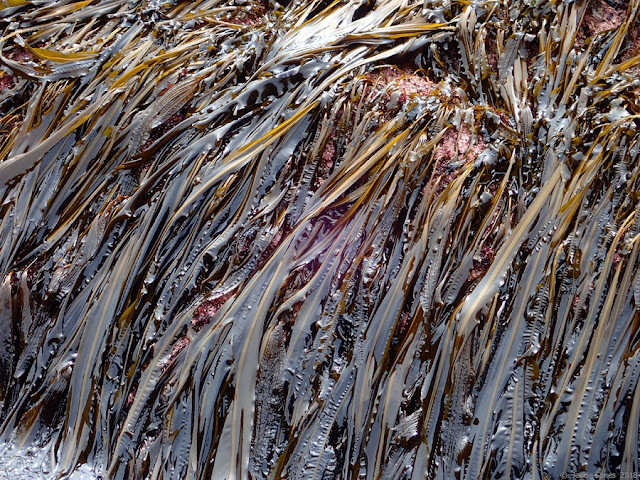 Another beautiful view of dense kelp in the low intertidal zone on the Mendocino coast — this one is Winged Kelp (Alaria marginata).

After field work near Mendocino on Sunday, we were walking up a coastal bluff and noticed some shallow pools off to the side of a small stream running along the rocks towards the ocean.  Looking down, some movement caught our eye: 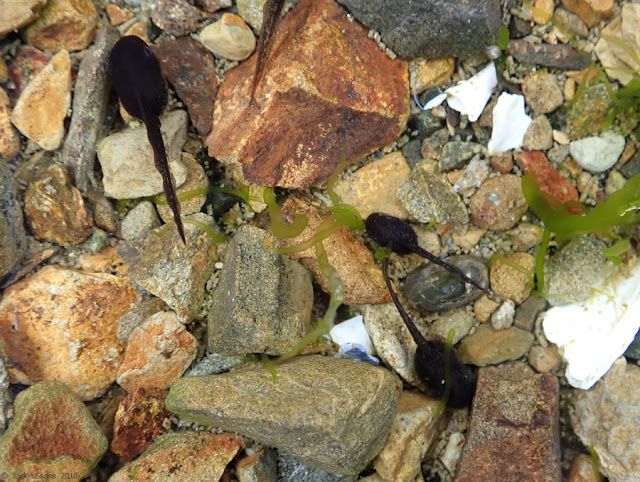 We followed the stream up to a small wet seep near the bluff.  Soon we saw tiny, newly-metamorphosed froglets (~1 cm long) jumping among the vegetation.

This one landed and nestled on the leaf of a Seep Monkeyflower (Mimulus guttatus): 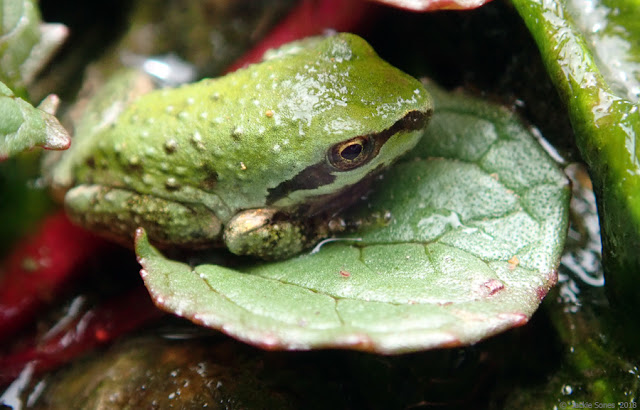 And here's one with wet feet: 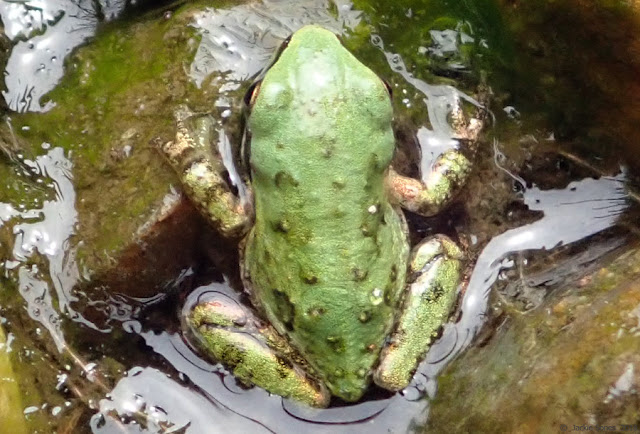 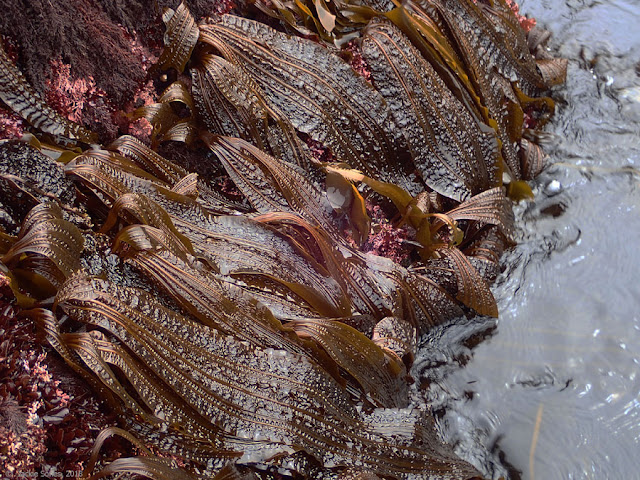 While working in Mendocino County this weekend we noticed many of the low intertidal kelps looked very healthy.  This is a beautiful patch of Five-ribbed Kelp (Costaria costata).  Many of the blades were nearly 6 feet tall.

P.S.  For a little more information about this species, see the previous post called "Puckered up" from 22 August 2012. 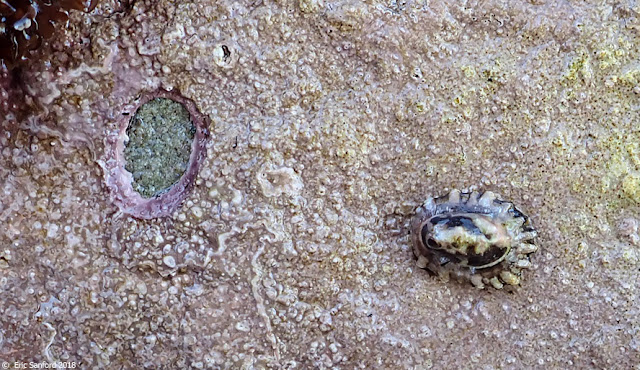 Rough Limpets (Lottia scabra) are known for having home scars — a site that the limpet returns to consistently when not foraging.

Home scars can be multi-dimensional, with the upper level of the home scar fitting the shell margin, and the lower level fitting the shape of the foot.  The scars are often eroded into rock, although in the case shown above, the form-fitting scar is worn into a layer of pink crustose coralline algae.

Can you see how this intertidal limpet fits into the scar (at the left) by matching the shape of the shell to the outline of the home scar?

Scientists studying the benefits of home scars have shown that the scars can prevent desiccation, reduce predation (with many predators, but not all), and increase survival after burial by sand.

P.S.  If you're curious about orientation, the head of the limpet is at the narrow end of the shell. 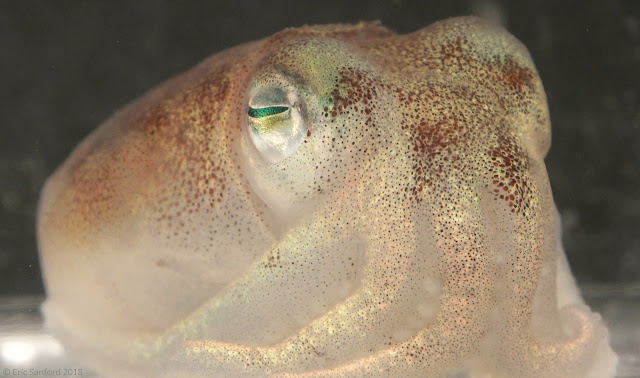 Every now and then you get to see something really special.  Yesterday, Dane let us know that Aaron Orsini, a local fisherman, had found a mysterious cephalopod in a crab trap.  It was brought to the marine lab where the Aquatic Resources Group identified it.

What a beautiful animal!  This is a North Pacific Bobtail Squid (Rossia pacifica).  Luckily, Eric had a few minutes to take some pictures and some video (don't miss the video clip below!).

Bobtail Squid are impressive color-changers.  Sometimes the squid appeared almost white; other times it was brick red.  (Watch the video clip to see the waves of color spread across the body.) 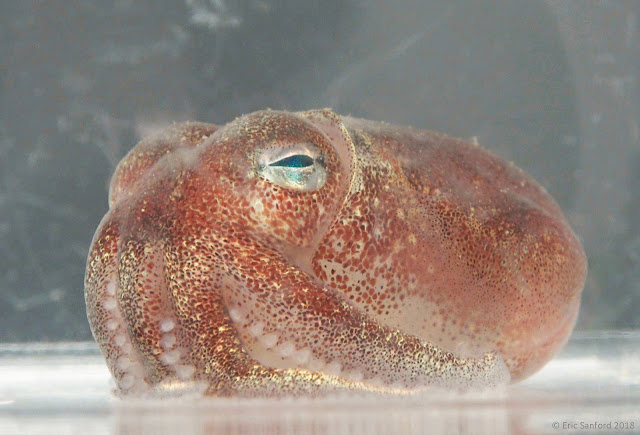 This animal spent a lot of time on the bottom, which might make you wonder if it's an octopus.  But then it would start swimming and its fins would be revealed (watch for the fins in the video below).  Octopus generally lack fins (with the exception of some specialized deep-sea octopus).

Bobtail squid are not true squid, but are actually more closely related to cuttlefish (but not the same as cuttlefish).  Note that the body of the bobtail squid is short and rounded and that the fins are also rounded and attached midway along the mantle.  In contrast, the bodies of most true squid are elongate and the fins are attached further back.  [And although not visible, the internal shells of bobtail squid are rudimentary and chitinous, rather than well developed like the "pens" of true squid or the calcareous internal shells (or "cuttlebones") of cuttlefish.]

- They're distributed along the Pacific Rim, from Japan to the Aleutian Islands to Baja.

- They're primarily subtidal, living at depths from ~10-300 meters, on sandy or muddy bottoms. (They're known for burying themselves in the sand.)

- They're pretty small — the mantle (portion of the body behind the head) reaches lengths of ~3-5 cm (females are larger than males).

- They feed primarily on shrimp.

Now for the real treat.  Check out this amazing video.  We're excited to share this footage of our first observation of a North Pacific Bobtail Squid (also called a Stubby Squid because of its short, rounded mantle.)

In the video, be sure to watch for the amazing color changes caused by the dynamic action of the chromatophores (pigment cells) in the skin.  And have you ever seen such beautiful emerald green eyes?

P.S.  Many thanks to Aaron, Dane, Bodega Marine Lab's Aquatic Resources Group, and Eric for making it possible to introduce you to Rossia pacifica.

One morning in May 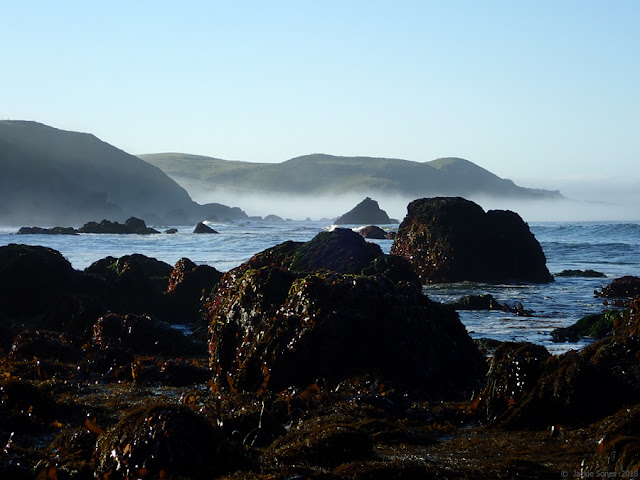 Breakfast with a pelican

Eric and I were doing some surveys early this morning when we surprised by a Brown Pelican (Pelecanus occidentalis) landing nearby: 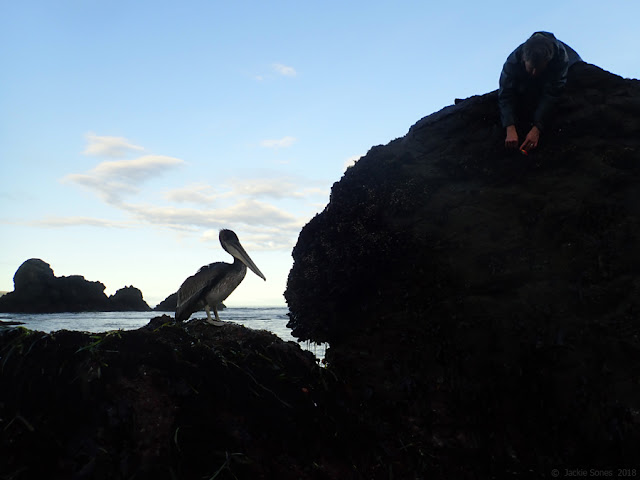 The tide was coming in, so we kept surveying, but I took one quick photo of "Spike" for the record (note the spiky feathers on the back of the pelican's head): 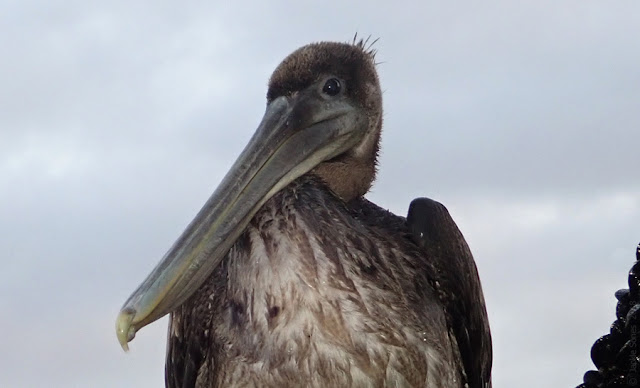 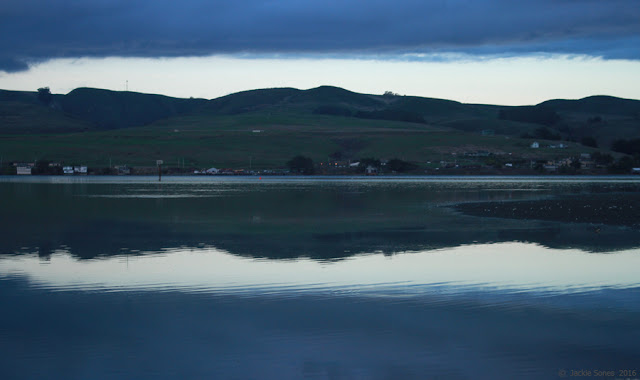 I've been sorting through some older photos.  This is Bodega Harbor on 2 February 2016.
Posted by Jackie Sones at 9:00 PM No comments: 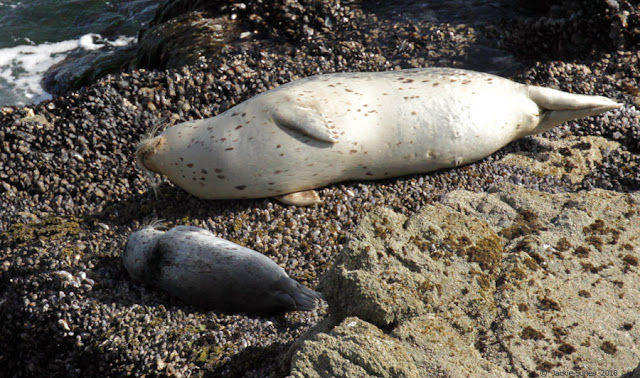 Another nice example of a Harbor Seal (Phoca vitulina) mother and pup. 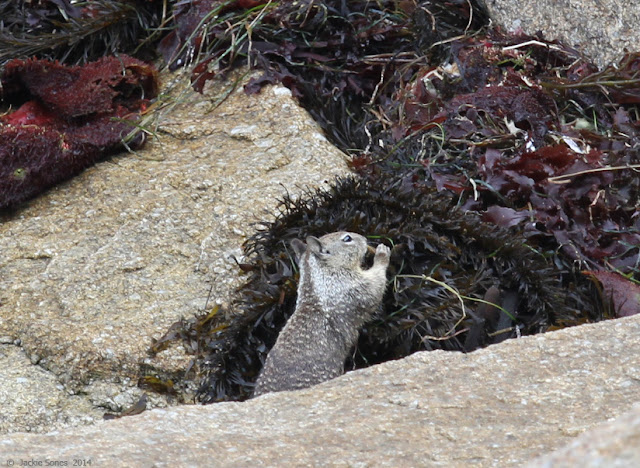 We were in Santa Cruz recently, and while we were there I remembered an encounter with a California Ground Squirrel (Otospermophilus beecheyi) in Pacific Grove several years ago.  I was intrigued to see the ground squirrel eating kelp — in this case, Feather Boa Kelp (Egregia menziesii).

I'm curious about how often mammals eat seaweeds.  Have you observed it before?

Here's a close-up of the ground squirrel: 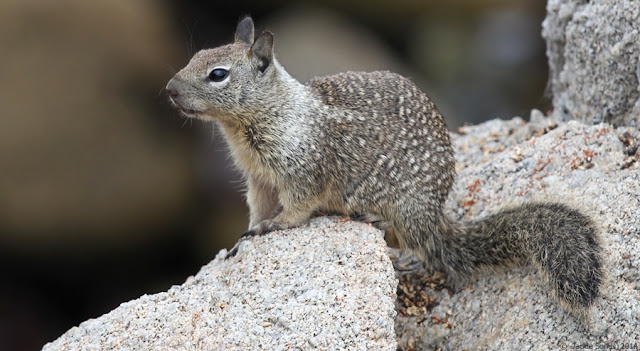 American Goldfinches (Spinus tristis), 5 May 2018.  [Click on the image for a larger version.] 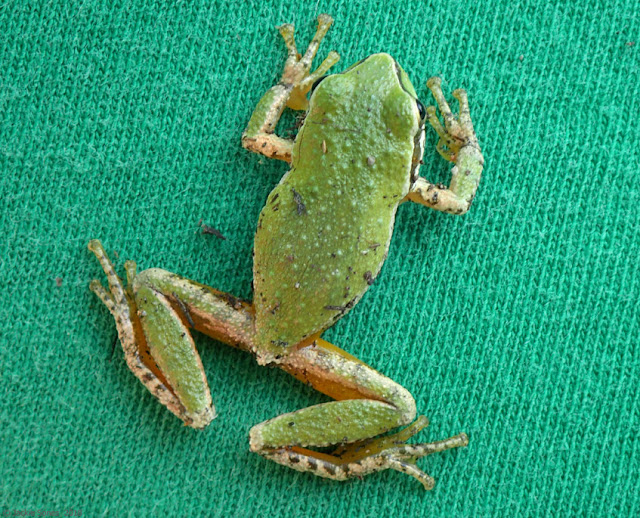 While doing some gardening yesterday, Eric looked down into a clay pot and spotted a small Sierran Treefrog (Pseudacris sierra).  We were enjoying the view, when the frog leaped onto Eric's t-shirt!

P.S.  Eric's Boston Celtics shirt seemed like an appropriate background for this frog...especially since we've been rooting for the Celtics in the playoffs.  Go Green!

Posted by Jackie Sones at 8:29 PM No comments:

We've been hearing Hooded Orioles (Icterus cucullatus) around our yard recently.  I was curious about why they were being so vocal, so I looked around a bit.

I followed some loud chattering to an adult male: 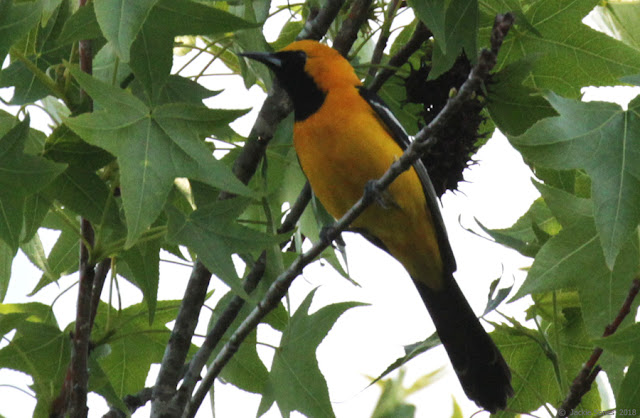 Then I followed his line-of-sight, and some slightly fainter chattering, to a pair of orioles in the distance: 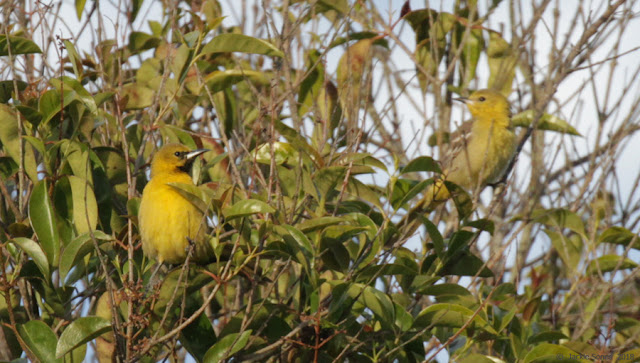 This is an immature male Hooded Oriole (on the left; note the black throat) and a female (on the right).  Perhaps the adult male and this pair were "discussing" the boundaries of their territories? 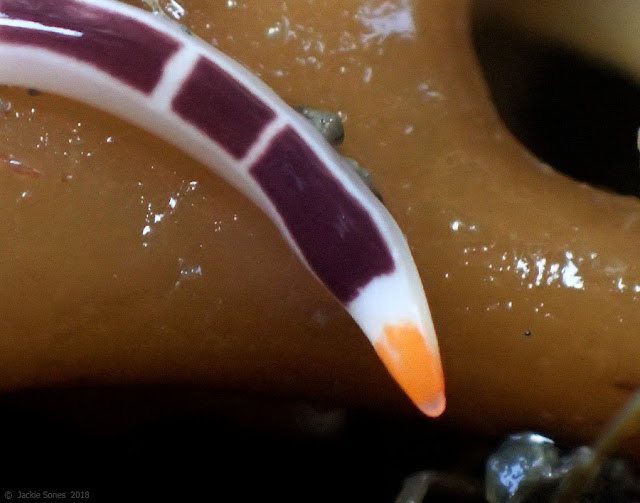 About 5 years ago, I posted some photos of this distinctive nemertean, so some of you might remember Verrill's Ribbon Worm (Micrura verrilli).  We've only encountered this species a few times, so we were happy to see it again.

Today (4 May 2018) Eric noticed it inside a Giant Kelp (Macrocystis pyrifera) holdfast washed up on the beach.  I only had time to take a quick snapshot, but I thought it would be a worthwhile record to document.

For the older post and a little more information (and some nice photos), see "A colorful tip" from 16 March 2013. 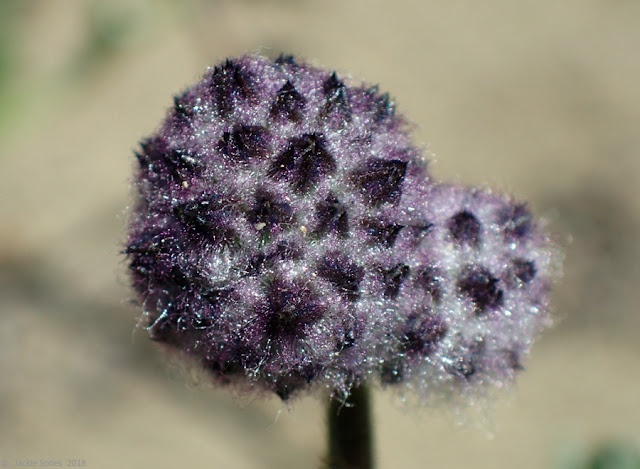 Here's an earlier post about this local dune wildflower — "Enjoying the Gilia" from 31 May 2012.
Posted by Jackie Sones at 9:00 PM No comments:

I'll always have childhood memories of flowers on May Day, so here are some for you: 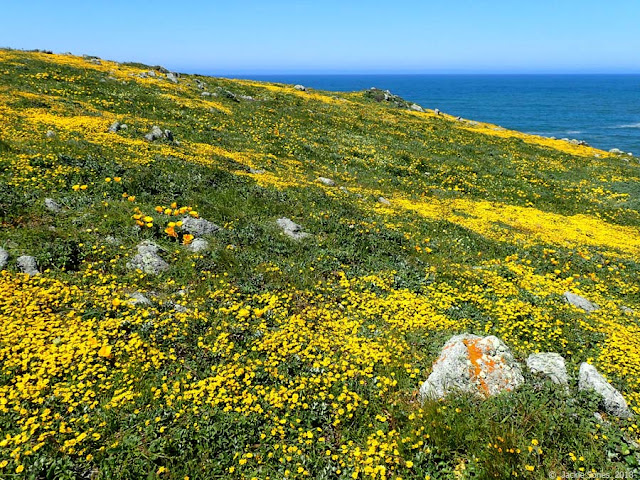