Well, I've run out of time again, but I promised to post an answer to last night's mystery photo, and I can share a few more images of the same animal.

Here's the picture from last night (below).  Did you have a guess about what type of animal this is from? 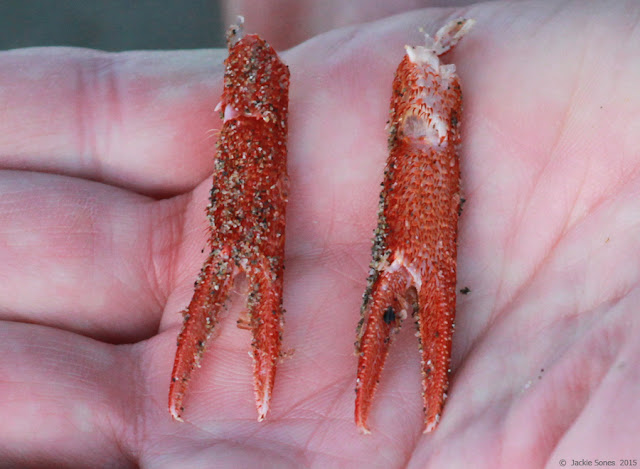 These are the claws of a Pelagic Red Crab (Pleuroncodes planipes)!

I've been following with great interest reports of Pelagic Red Crabs (sometimes called "tuna crabs") washing up in Southern California, and more recently in Central California (during the second week of October in Monterey and Pacific Grove).  Only rarely has this species made it to Northern California, but it seemed like the chances were pretty good this year, given the significant El Niño conditions.

So Eric and I walked Salmon Creek Beach on 17 October 2015 with Pelagic Red Crabs on our minds.  We were nearing the end of the walk without seeing any signs of one, and then we had a funny moment.  At the same time, in separate locations (~4 feet apart), Eric and I both looked down and said something like, "What's this?!"  Each of us had spotted a telltale red claw.

We think this crab had just been eaten by a gull, but there were two claws and one leg on the beach.

Amazing!  We can only find a few records for Pelagic Red Crabs in Northern California — Duxbury Reef and Fort Bragg in 1985, Cordell Bank in 2015 (by Point Blue), and now this one in Bodega Bay. [Thanks to Jim for helping us track down these records.]

This is very much a southern species, most abundant off the west coast of southern Baja California.

Here are a few close-ups of one claw under the microscope. 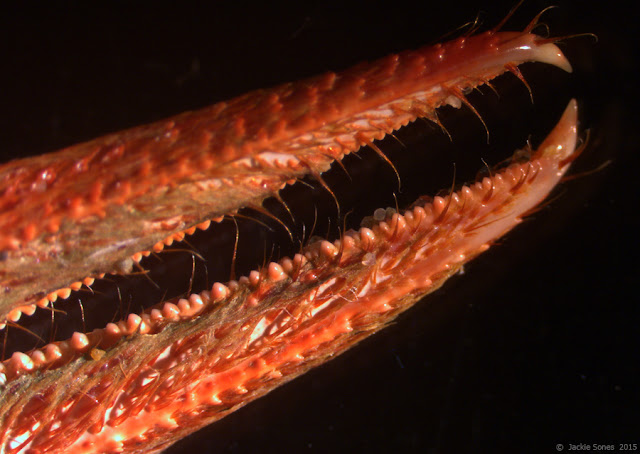 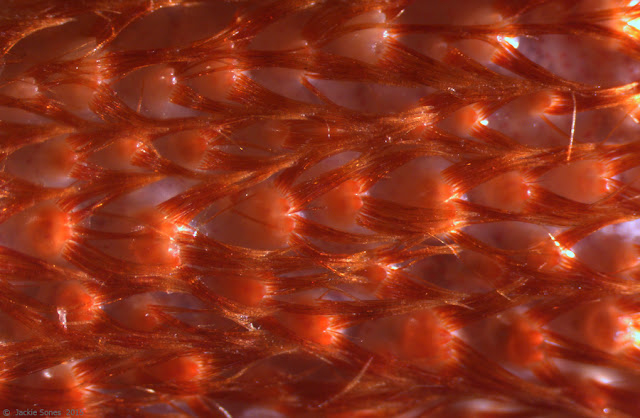 The photo above was taken out of water.  The next image shows the "bristles" under water, fanning out like paintbrushes. 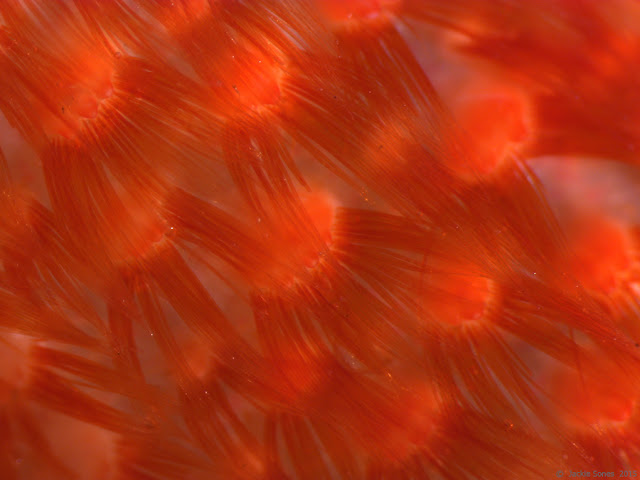 We read one description that said Pelagic Red Crab "bristles" increase surface area and function like a "parachute" when the crabs are drifting in the water column.

I hope to see an entire individual some day.  Keep your eyes open when walking local beaches, or when you're out on the water — If you find one, I'd love to hear about it!

P.S.  Here's a very nice picture of an entire Pelagic Red Crab from Scripps.
Posted by Jackie Sones at 10:00 PM