For the record, I'm sharing a few more photos of the California Mussel mortality event in the intertidal zone that I mentioned last night.  We think this is the most significant mussel mortality we've seen on Bodega Head during the last 15 years (in terms of number of individuals and the amount of area impacted).

In these patches (photographed on 19 June 2019) you can see that most of the mussels in the top layer of the mussel bed have died.  The light blue color is the inside of the dead, gaping shells.

Although it's hard to estimate percent mortality throughout the entire mussel bed, many areas across the intertidal zone look like this right now, with some shells gaping wider than others. 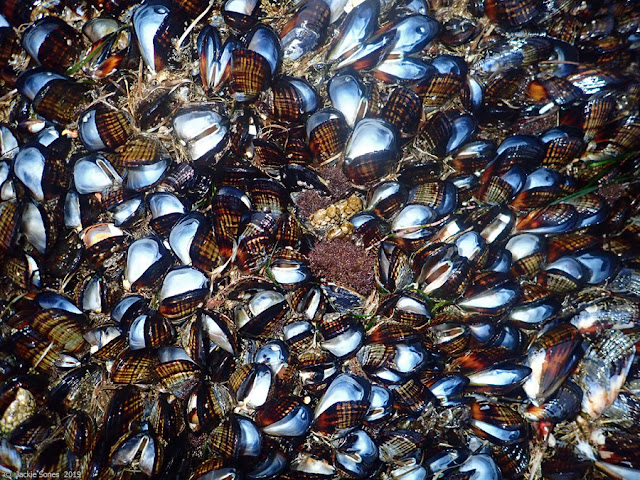 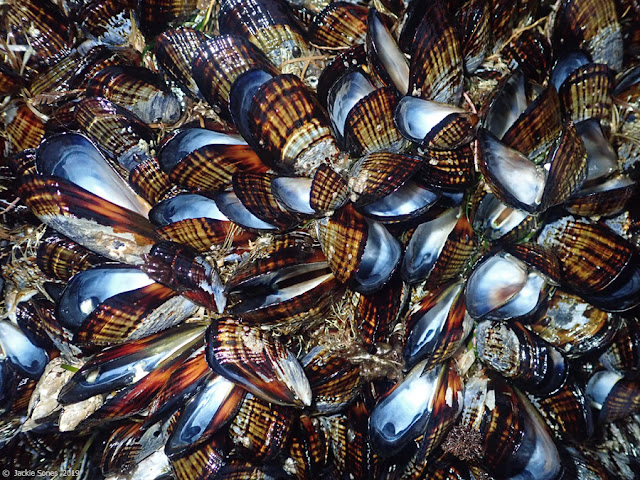 I was wondering if you ever see any small black sea cucumbers in the beds?

Nice to hear from you! Well, the short story is that prior to 2011 we often found small sea cucumbers in the mussel beds on Bodega Head. However, we haven't seen one (not even one!) since then. That was the year there was a harmful algal bloom that impacted a variety of marine invertebrates. Although not often mentioned when HABs are discussed, the sea cucumbers (Cucumaria pseudocurata) in the mussel bed appear to have been impacted at that time. As you know, because they're brooders and don't have planktonic larvae, and because Bodega Head is flanked by sandy beaches to the north and south, it might take a while before we see them here again, but we continue to look for them.

P.S. Since 2011, we have seen them farther north, e.g., in Mendocino County and Humboldt County.

While I can appreciate your dismay at the sight of such destruction of the mussel beds along Bodega, were you aware that the media would misrepresent your words? I just read this article on MSN.com:

In it, they claim that the air temperature in Bodega reached 100-F (not true) and then they quoted a Canadian researcher who claimed that these events are becoming more frequent and severe. I would like to see some data to back that claim up, because speaking as an avid fisherman who has frequented Bodega and Tomales bays for the last 40+ years, I can say with 100% certainty that while the combination of a very low tide and warm temperatures is uncommon along the northern California coast, it isn't unheard of or even rare. Over the last 40 years I can think of at least a dozen times when I've seen similar die-offs in the area.


While I may sound like a climate change denier I am not. I just don't appreciate certain segments of the media grabbing onto a story and misrepresenting portions of it to advance their obvious agenda.

Thanks so much for writing. I spent a lot of time fishing on the East Coast when I was younger (commercially and recreationally), so I really value your time and observations on the water.

Lots to think about here, so I’ll try to respond to a few of your comments below.

First I should mention that the original story about the mussel die-off was in Bay Nature magazine: https://baynature.org/2019/06/26/californias-early-june-heat-wave-cooked-coastal-mussels-in-place/

After interacting with the media in various ways for over 30 years, I suppose I’m not surprised that there are often inaccuracies or misrepresentations. You always hope for the best, but there’s often something that doesn’t come out quite right. In general, I’m hopeful that the main message overrides the errors, and that it’s better to see an article trying to raise awareness than no article at all. At the same time, it is disappointing to see the number of errors or misrepresentations rising as the Internet allows (pressures?) stories to spread at a much faster pace. The MSN story should have been fact-checked.

Re: the claim that these events are becoming more frequent and severe. I think the researcher was referring to extreme weather events in general, but not specifically to mussel die-offs in Bodega Bay. This is an active area of research, but climate scientists have published studies about the general concept that rising global temperatures are leading to an increase in the frequency and duration of extreme weather events. If you’re interested, there was a recent article about this talking about how marine heatwaves have become more frequent (globally): https://www.nature.com/articles/s41467-018-03732-9

I’m very interested in your observations of local mussel die-offs. If you have memories or notes or photographs of die-offs in the past, I’d be interested in hearing more about them. How do you think the June 2019 mussel die-off compares to die-offs you’ve seen previously? For example, is the number of dead mussels similar, or is the size of the area that the die-off has affected smaller or larger?

I appreciate your comments and observations, and the chance to add more to what is known about mussel die-offs in this area.