Last week's record warm air temperatures (for the date) seem to have impacted some of the local rocky intertidal zone species.  Unfortunately, the high air temperatures coincided with midday low tides.  Sometimes it takes a little while for the effects to show up.

While doing field work this morning (18 June 2019), we observed quite a bit of bleached algae in the mid-to-high zone (see below).  These seaweeds are usually darker green and brown — the whites and reds are abnormal for these species.  [In this photo, much of the white algae in the foreground is Mazzaella sp., while the reddish looking species is Dwarf Rockweed (Pelvetiopsis limitata).] 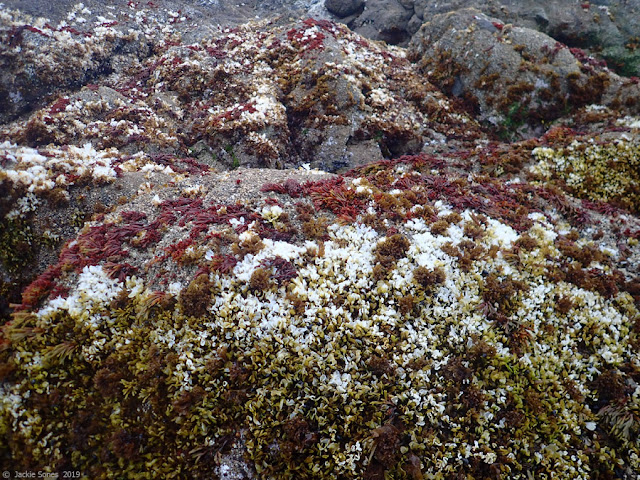 There has also been a significant die-off of California Mussels (Mytilus californianus).  A large percentage of the mussels were open and gaping, some were empty and some still had tissue inside.  Here's one example: 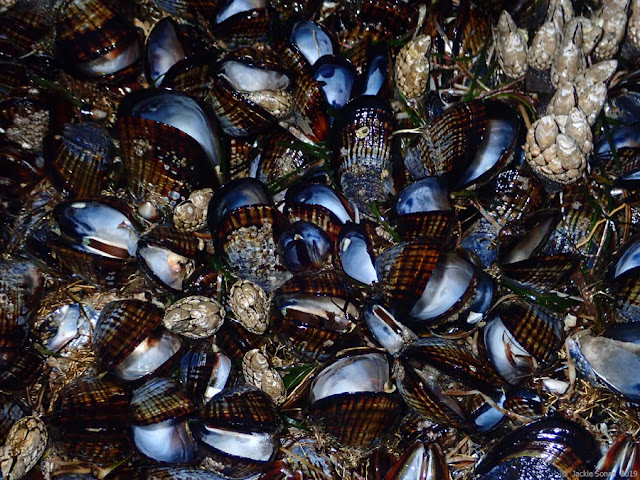 We're curious about how widespread this mussel die-off was.  If you see large patches of open, gaping, dead mussels in the intertidal zone and you'd be willing to share a photo, I'd be interested in hearing about your observations.

Thank you Jackie for sharing this even though it's difficult to see. I was at the coast for three mornings during those low tides and the seaweed and the mussels looked good then, but of course, it takes a few days to show the stress of the heat. It was freakishly warm those days. Any thoughts of how long it may take for the mussels to recover? I did notice at least one rock that had a newer mussel colony on it as they were only an inch or so long.

Yes, thanks Jackie. I had not seen this but will keep an eye out. Thank you for sharing!

Congrats on the London Guardian article! While paddling late last month, we noticed piles of large mussel shells in the intertidal just outside the Golden Gate around to Rodeo. Also, many dead mussles agape and still attached to rocks in Tomales Bay and around Tomales Point.

Thanks so much for these reports from San Francisco and Tomales Point. They're very much appreciated! We were up near Salt Point today (6 July 2019) and observed some dead/gaping mussels up there, but the mortality rate was lower than on Bodega Head. It's helpful to document how the mussels did at different sites.